Tremor is built by leading experts in smart market design.

Tremor was founded in 2017 to revolutionize the way reinsurance is placed.

Our accomplished multidisciplinary team is excited to harness the power of modern competitive markets to help cedents place their risk. 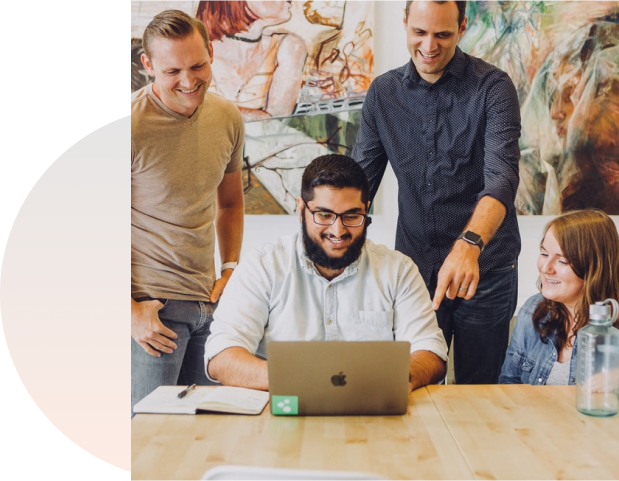 They talk about us.

Tremor is building a reputation for innovation and success.

We are a team.

From economics to reinsurance, we bring the expertise to revolutionize risk placement.

Sean is the founder & CEO of Tremor. Sean started his career in the reinsurance industry as a Treaty Underwriter in both the U.S. and European markets. After a number of years in reinsurance, Sean transitioned to the technology sector where he has spent the majority of his career building marketplace products and services. Prior to Tremor, he was the Director of Product Management for AOL’s programmatic advertising marketplace. Prior to AOL, he was a founding member of Yahoo!’s contextual advertising marketplace team.

Sean founded Tremor to dramatically improve reinsurance market structure by incorporating the state-of-the-art optimization and auction technologies that have modernized many negotiated subscription markets. Sean received his B.A. from Brown University, an MSc from Northwestern University and an MBA from the University of Chicago, where he was the 2005 Global Leadership Prize winner.

Peter is Professor of Economics at the University of Maryland and the University of Cologne. Since 1983, he has conducted research on auction theory and practice. This research appears in the leading economics journals. The focus is the design of auctions for many related items. Applications include spectrum auctions, electricity auctions, and treasury auctions. On the practical side, he is Founder and Chairman of Cramton Associates LLC, which since 1993 has provided expert advice on auctions and market design. Since 2001, he has played a lead role in the design and implementation of electricity auctions in France and Belgium, gas auctions in Germany, and the world’s first auction for greenhouse gas emissions held in the UK in 2002. He has advised numerous governments on market design and has advised dozens of bidders in high-stake auction markets. Since 1997, he has advised ISO New England on electricity market design and was a lead designer of New England’s forward capacity auction. He led the design of electricity and gas markets in Colombia, including the Firm Energy Market, the Forward Energy Market, and the Long-term Gas Market. Since June 2006, he played a leading role in the design and development of Ofcom’s spectrum auctions in the UK. He played a leading role in the design of the Canadian and Australian spectrum auctions. He has advised the UK, the US, and Australia on greenhouse gas auction design. He led the development of the FAA’s airport slot auctions for the New York City airports. He received his B.S. in Engineering from Cornell University and his Ph.D. in Business from Stanford University.

Jason started at Tremor as a market design engineer, being responsible for the translation of market design concepts into actionable components of Tremor’s technology stack, including Tremor’s proprietary risk matching engine. Jason’s core specialty is bringing mathematical modeling and high-performance computing to bear on problems of import. In his academic work, Jason has published in a number of disparate fields including biology, cognitive science, and physics. In addition to working at a number of internet startups prior to Tremor, Jason spent 4 years in civil service at the Air Force Office of Scientific Research, working with AFOSR’s research programs in applied mathematics, optimization, and computer science.

Jason holds an Sc.B. from Brown University with dual concentrations in pure mathematics and education, an M.S. from Georgetown University in statistics, and a Ph.D. from the University of California, Merced in applied mathematics.

Suzan is responsible for all aspects of Tremor’s legal and compliance functions as well as the business operations of the company. Suzan is an accomplished legal practitioner and manager with over 16 years of combined in-house and law firm experience. In her legal practice, Suzan advised large and small companies on securities, regulatory, employment and intellectual property matters.

Prior to joining Tremor, Suzan was a Vice President and Assistant General Counsel at Cantor Fitzgerald where she represented Cantor Fitzgerald and all its affiliates, including BCG Partners and Newmark Knight Frank, in a variety of matters. Before that, Suzan was a partner at Duane Morris LLP, an AmLaw 100 law firm, where she was deeply involved in the firm’s management, recruiting and employee retention.

Suzan’s legal expertise has been recognized by “Super Lawyers” magazine and she was inducted by her alma mater into the inaugural class of “40 under 40”. Suzan is passionate about promoting diversity in the legal profession and was a Fellow of the Leadership Council on Legal Diversity.

Suzan received her BA from Stony Brook University and her J.D. from New York University School of Law.

As CPO, Chris heads product at Tremor. Chris joined Tremor from the technology industry where he worked on some of the industry’s leading ad marketplaces. From 2013-2018, Chris worked as a research scientist supporting ad marketplaces at Yahoo and Facebook. He lead a cutting edge redesign of Yahoo’s Gemini Search auction and designed/improved many ad auctions at the two companies. He also developed key marketplace analyses that informed strategic decisions about the companies' ad products.

Chris is passionate about designing markets that enable profitable exchange with minimal friction. As part of his Ph.D., he studied market mechanisms that could improve auctions for internet advertising. Since then, he has melded real-world observation and data science with insights from the academic theory to design sound marketplaces. He also engages the academic community, with work appearing in top Computer Science conferences and journals.

Al is the Craig and Susan McCaw Professor of Economics at Stanford University and the George Gund Professor Emeritus of Economics and Business Administration at Harvard.

Al shared the 2012 Nobel memorial prize in Economics, ‘for the theory of stable allocations and the practice of market design.’ His work is in game theory, experimental economics, and market design.

He directed the redesign of the National Resident Matching Program, through which most American doctors find their first employment as residents at American hospitals. He has also helped in the reorganisation of the market for more senior physicians, as they pursue sub-specialty training and in other labour markets. He helped design elements of the market for new Ph.D. economists.

Al helped design the high school matching systems used in New York City, and the school choice systems for public and charter schools in other large American cities. He has helped in the design and implementation of kidney exchange, which allows incompatible patient-donor pairs to find compatible kidneys for transplantation.

He is a Fellow of the American Academy of Arts and Sciences, and a member of the National Academy of Sciences.

Costis is the X-Window Associate Professor of Electrical Engineering and Computer Science, a member of the Computer Science and Artificial Intelligence Laboratory (CSAIL), and an affiliate of the Laboratory for Information and Decision Systems (LIDS) and the Operations Research Center (ORC).

He completed his undergraduate studies in Greece, at the National Technical University of Athens, and obtained a PhD in Computer Science from UC Berkeley. After Berkeley he was a postdoctoral researcher in Microsoft Research New England, and has been at the faculty of MIT since 2009.

Costis is interested in Algorithmic Game Theory and Applied Probability, particularly in computational aspects of markets and the Internet, in social networks, in computational problems in Biology, and in complexity.

Costis and his collaborators, Paul Goldberg and Christos Papadimitriou, were honored by the Game Theory Society with the first Game Theory and Computer Science Prize for their work on the Computational Complexity of Nash equilibria. Their same work was honored with the 2011 SIAM Outstanding Paper Prize. Costis was also the recipient of the 2006 Best Student Paper Award at the ACM Conference on Electronic Commerce, a 2007 Microsoft Graduate Research Fellowship, the 2008 ACM Doctoral Dissertation Award, a 2010 Sloan Foundation fellowship in Computer Science,the 2011 MIT Ruth and Joel Spira Award for Distinguished Teaching, and a 2012 Microsoft Research Faculty Fellowship.

Sven is an Associate Professor at the Department of Informatics of the University of Zurich and head of the Computation and Economics Research Group. His research lies at the intersection of Computer Science and Microeconomics/Game Theory, with a focus on the design and analysis of electronic markets and market-based systems.

Sven received his Ph.D. in Computer Science from Harvard University in May 2011, where his advisor was David C. Parkes. He received several awards, including a Google Faculty Research Award, a Microsoft Research PhD Fellowship, a Fulbright Fellowship, and he was invited to give an early career spotlight talk at IJCAI’16.

David is a member of the Market Design Engineering team at Tremor. His role involves all aspects of the market design process, from initial design to practical implementation. Challenges include understanding and addressing incentive issues arising in specific markets; formulating and tuning market designs as mathematical optimization problems; and implementing these formulations as practical, working market platforms. In market design small decisions can have high impact, making a holistic approach that considers all of these issues critical to creating a market that successfully meets the particular needs of buyers and sellers within a given domain. In his role as Market Design Engineer, David focuses on ensuring that all parts of the market design process come together to create a platform that provides the maximum possible value to participants.

In addition to his work with Tremor, David Malec is also a Principal of Cramton Associates LLC and a post-doc in the Economics Department at the University of Maryland. His academic research focuses on topics at the interface between the fields of computer science and economics, and how complex economic settings can be approached algorithmically. He is particularly interested in how algorithmic techniques and insights can be applied in practical economic settings, and how this can be used to create markets and auctions for environments that would otherwise be intractable. He received his B.A. in Computer Science and Mathematics from Lake Forest College in 2007, and his Ph.D. in Computer Science from the University of Wisconsin, Madison in 2014, and his work has appeared in top conferences in algorithmic game theory and theoretical computer science.

After receiving his Bachelor’s degree in Computer Science from Harvard University, Ben joined BBN Technologies, the research and development firm where the first internet routers were developed, working on advanced multi-agent modeling, scheduling and logistics systems. After six years in industry, he returned to Harvard University to pursue a Ph.D. at the intersection of computer science, game theory and economics. Upon graduation he joined Boston University’s Questrom School of Business as an Assistant Professor in the Information Systems department, an affiliation he maintains in addition to his work for Tremor. Dr. Lubin’s research is in three primary areas: (1) mechanism design, especially of combinatorial auctions and exchanges, mechanisms that support efficient reallocation of goods when participants have complex preferences regarding bundles of items, (2) applications of machine learning techniques to mechanism design, especially for pricing and to facilitate preference elicitation, (3) the use of spectral graph theory and machine learning to advance the analysis of social networks, especially in healthcare settings. Dr. Lubin is a recipient of the Siebel Fellowship and a Yahoo Key Technical Challenge award. Portions of his academic research are funded by the NSF, the NIHCM, and the Veterans Administration.

Join a team that is revolutionizing the way risk is placed.

Behind our state-of-the-art placement technology is a growing team of exceptional market scientists, engineers, product designers, and economists.